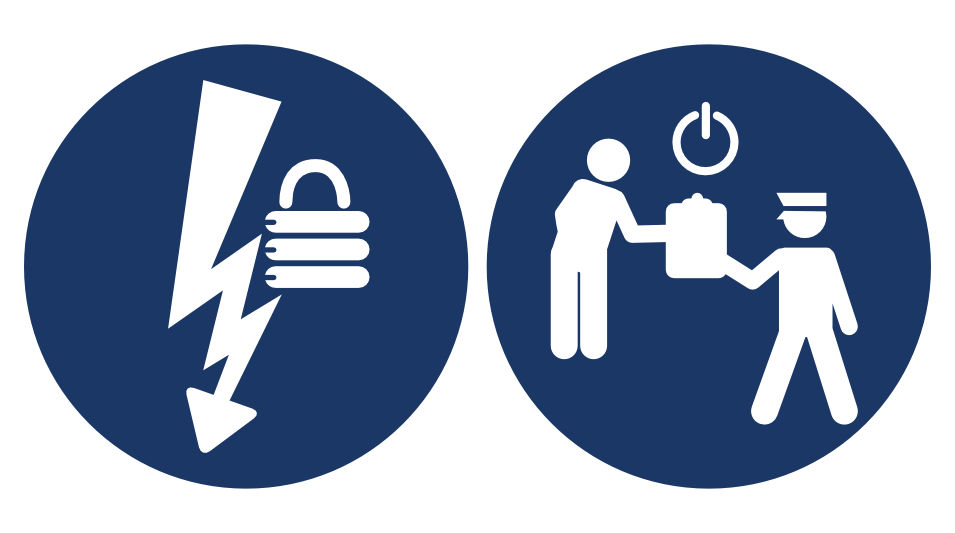 Most accidents occur when there is an unplanned transfer of energy from one place to another. As an example, a hammer dropped from a height will have kinetic energy, and when the falling hammer is stopped by hitting another object it will exert a force into that object, placing the object under stress. If that object is your head, the stress may be fatal.

The purpose of safety isolations is to ensure that there is no unplanned, unsafe transfer of energy from one place to another that will cause damage or injury to people, structures or equipment or the environment.

There are many forms of energy but one of the most widely encountered in a ship, and potentially the most dangerous is electrical energy.

Electrical energy is produced, stored, transferred and used throughout the vessel and is essential for the operation of the ship and the safety and comfort of those on board. But electricity can be very unforgiving to the unwary!

The main hazards associated with electricity are:

SHOCK Electric shock occurs when the human body becomes part of a path through which electrons can flow. That is, part of the electrical circuit. The resulting effect on the body can be either direct or indirect:

BURNS Heat is generated in an electrical conductor by the flow of electric current through it. The higher the electrical resistance, the more heat is produced. Burns can result when a person touches electrical wiring or equipment that is improperly used or poorly maintained.

ARC-BLAST Arc-blasts occur from high-amperage cur- rents arcing through air. This abnormal current flow (arc- blast) is initiated by contact between two energized points. This contact can be caused by persons who have an accident while working on energized components, or by equipment failure due to fatigue or abuse. Temperatures as high as 35,000oF (19,426oC) have been recorded in arc-blast research. The three primary hazards associated with an arc-blast are:

The Effects of Electricity on the Human Body depend on several factors. The main things to consider are:

CURRENT AND VOLTAGE High voltage can cause burns and tissue damage at the point of contact, but it is the electrical current that is likely to cause most physical harm. Alternating current will produce a tingling sensation at low values and, at higher current, will cause muscle spasms. These spasms will cause the casualty to lose control of their muscles and, as the current gets to around 15 mA the victim will be unable to let go of the electrically conductive surface and may “freeze” to the electrical circuit. A current of around 100 mA may cause ventricular fibrillation of the heart leading to death. A large current may also result in burns.

ELECTRICAL RESISTANCE The electrical resistance of the human body varies with the amount of moisture on the skin, the pressure applied to the contact point, and the contact area. The outer layer of skin, called the epidermis, has very high resistance when dry but moisture or a cut or other break in the skin will drastically reduce resistance. Shock severity will also increase with an increase in the pressure of contact. Also, the larger the contact area, the lower the resistance. Whatever protection is offered by skin resistance decreases rapidly with increase in voltage and higher voltages have the capability of “breaking down” the outer layers of the skin, thereby reducing the resistance.

PATH THROUGH THE BODY The path that the current takes through the body will also affect the degree of injury. A small current that passes from one extremity through the heart to the other extremity can cause death. On the other hand, there have been many cases where an arm or leg was almost burned off when it came in contact with electrical current but because the current did not pass through the trunk of the body near the heart, the casualty did not die of electrocution.

DURATION OF THE SHOCK Generally, the shorter the duration of the shock, the less likely death or serious injury will result. However, if the current is large, or the electricity travels through or near to the heart, death can occur almost instantaneously.

EXPLOSIONS Explosions occur when electricity provides a source of ignition for an explosive mixture in the atmosphere. Ignition can be due to overheated conductors or equipment, or normal arcing (sparking) at switch contacts. This is why standard electrical equipment and fittings are not allowed in some spaces on board and it is important that the rules for specific compartments such as tanks and battery rooms are understood and followed.

FIRES Electricity is one of the most common causes of fire both at home and on board ships. Defective or in- correctly serviced equipment, together with overloaded plug sockets, are major causes of fires. The message is simple – use electrical equipment correctly, keep it in good condition and do not overload plug sockets. Private electrical equipment on board should not be left unattended whilst charging.

Energy may also be stored in Hydraulic Systems and High-Pressure Air or Gas Systems.
Compressed air is a concentrated stream of air at high pressure and high speed that can cause serious injury to operators and the people around them. It is possible for compressed air to enter the blood stream through a break in the skin or through a body opening. An air bubble in the blood stream is known medically as an embolism, a dangerous medical condition in which a blood vessel is blocked, in this case, by an air bubble.

An embolism of an artery can cause coma, paralysis or death depending upon its size, duration and location. While air embolisms are usually associated with incorrect scuba-diving procedures, they are possible with compressed air due to high pressures. This may all seem to be improbable, but the consequences of even a small quantity of air or other gas in the blood can quickly be fatal so it needs to be taken seriously.

Unfortunately, fooling around with compressed air has been a cause of some serious workplace accidents caused by individuals not aware of the hazards of com- pressed air, or proper work procedures.

In addition to the dangers above, a sudden release of compressed air or other gas can cause structural damage and propel objects at dangerously high speeds, causing injury.

To do their work, hydraulic systems must store fluid under high pressure, typically above 2,000 pounds per square inch (Psi) or 135 Bar. One hazard comes from removing or adjusting components without releasing the pressure. The fluid, under tremendous pressure, is also hot. The seafarer can be exposed to three kinds of hazards: burns from hot, high-pressure fluid; bruises, cuts or abrasions from flailing hydraulic lines and hydraulic injection of fluid into the skin.

A common, and dangerous, injury associated with hydraulic systems is the result of pinhole leaks in hoses. These leaks are difficult to locate. If you notice a damp, oily, dirty place near a hydraulic line. DO NOT run your hand or finger along the line to find it. When the pinhole is touched, the fluid can easily be injected into the skin as if from a hypodermic syringe.

Immediately after the injection, the casualty experiences only a slight stinging sensation and may not think much about it. Several hours later, however, the wound begins to throb, and severe pain begins. By the time a doctor is seen, it is often too late, and the casualty may lose a finger or even an entire arm.

Unfortunately, this kind of accident is not uncommon. To reduce the chances of this type of injury, run a piece of wood or cardboard along the hose (rather than fingers) to detect the leak.

MAKE SURE NO UNPLANNED TRANSFER OF ENERGY CAUSES YOU HARM – MAKE SURE SAFETY ISOLATIONS ARE IN PLACE AND ALWAYS FOLLOW THE PERMIT TO WORK SYSTEM.