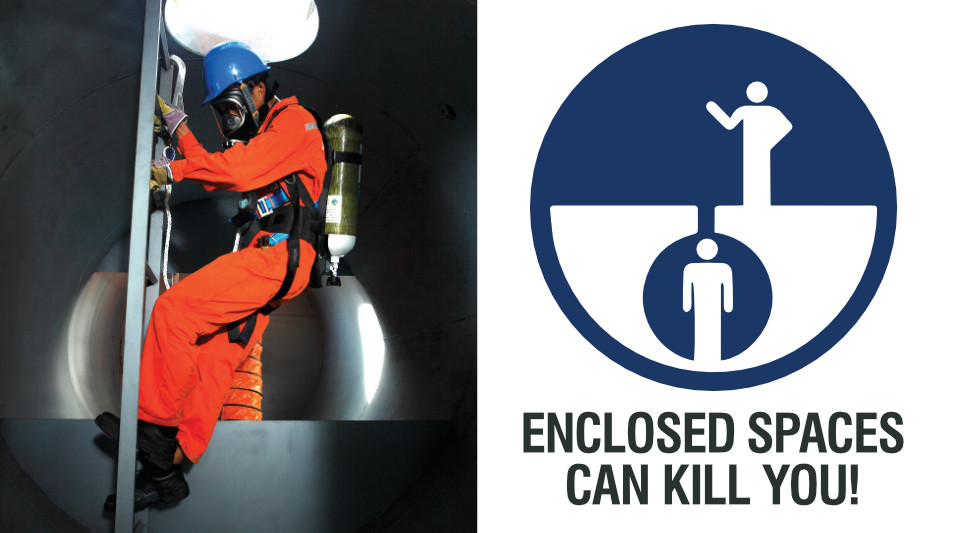 Around 300 people die and 16,000 are injured in enclosed spaces each year, which means somebody dies needlessly almost every day. Perhaps the most shocking statistic is that for every one person requiring assistance, two or three people will die trying to rescue them.

The terms “Enclosed Space” or “Confined Space” suggest somewhere small and inaccessible but this is not always the case; a better term may be “Dangerous Space”. The UK Merchant Shipping (Entry into Dangerous Spaces) Regulations and Chapter 15 of the Code of Safe Working Practices for Merchant Seamen (COSWP) define a Dangerous Space as: “Any enclosed or confined space in which it is foreseeable that the atmosphere may at some stage contain toxic or flammable gases or vapours, or be deficient in oxygen, to the extent that it may endanger the life or health of any person entering that space”. Some of these spaces may be obvious, like fuel tanks, sewage tanks or void spaces but some may not seem at first to be dangerous. Depending on the type of cargo carried, open holds may be deficient in oxygen or contain harmful gases or vapours; compartments which have ventilation ducts from holds or tanks may be dangerous; chain lockers and other spaces which are rarely visited will almost certainly be unsafe to work in.

Dangerous spaces may contain some or all of the usual physical hazards encountered in a ship such as trip hazards, low sills and projections on which to bang your head, dangers from pressurised systems, electricity and moving machinery. Larger spaces may have hazards associated with working at height and if spaces are actually enclosed or confined, there may be a risk of becoming stuck or of individuals suffering from claustrophobia. However, it is the quality of the atmosphere which defines a dangerous space and it is the invisible hazards of an unsafe atmosphere that must be fully understood before working in dangerous spaces.

Only oxygen supports life, therefore if the atmosphere is made up of inert gases such as nitrogen you will not be able to breathe, will quickly lose consciousness and, if resuscitation is not carried out quickly, you will die. Other gases and toxic fumes may be given off by particular cargoes, fuels or residues (particularly in sewage tanks) or be present as a result of combustion (carbon monoxide). Death or injury may result from these gases being poisonous, or simply because they have displaced the oxygen that is necessary to support life. Some gases such as hydrogen, hydrogen sulphide and acetylene, and vapours from fuel residues may be explosive. Some of these gases may be detected by sight, smell or taste but it is important to remember that you cannot judge the concentration or the level of risk: only properly used monitoring equipment can give an indication if the space is safe to enter.

The leading cause of death is lack of oxygen. Oxygen is used up when metals rust (such as inside a closed chain locker); it is used up during combustion (such as cutting and welding, or when running a diesel or petrol powered motor); it can also be used up by certain cargoes and may be displaced by other gases as discussed earlier. The air we breathe is made up of around 78% nitrogen, 21% oxygen and 1% other gases (mainly argon) and water vapour. This is the mixture that the human body is designed to use, and we have a remarkably low tolerance of any changes. Mental concentration, decision making and physical coordination are quickly impaired almost as soon as the oxygen level falls below normal. Vertigo, headache and speech difficulties may be signs of oxygen deficiency but very often the person suffering from lack of oxygen will not be aware of any symptoms until it is too late. If the oxygen level is really low, or other gases are present, one or two breaths may be enough for you to lose consciousness and die.

Too much oxygen is not such a common hazard, but is also dangerous as it will greatly increase the risk of fire and explosion. Materials which do not normally catch fire may burn fiercely or even explode in a high oxygen atmosphere.

Always remember you cannot see, smell, taste, touch or hear if there is enough oxygen in a space; you can only find out by the correct use of a properly calibrated and maintained oxygen monitor.

To control the hazards associated with dangerous spaces two things are essential: a proper risk assessment and a safe system of work controlled by a clear permit to work system. As a seafarer it is very important that you understand the risks and follow the procedures to stay safe. If you see, or suspect, that someone is in difficulty in a dangerous space DO NOT ENTER without assistance and proper breathing apparatus. Remember the golden rule: IF IN DOUBT – KEEP OUT. Stay safe.

Uniteam Training offers a two-day Confined Space Entry & Rescue Course which is conducted at the training centre in Yangon.

The course includes a significant practical element and is suitable for anyone who will work inside or around confined spaces. Delegates learn how to identify and control/eliminate the hazards associated with confined spaces, as well as how to operate safely within a confined space work environment.

On the second day of the course, trainees carry out a rescue from a real confined space under the close supervision of the instructors. So far over 1900 people have successfully completed this training. Further details about this course and other training opportunities can be found at info@uniteamtraining.com.